Bulgaria is one of the oldest producers of wine in the world with archeological studies pointing to evidence of wine making as early as 4 000 BC. The Bulgarian lands were then inhabited by the Thracians who were famous for their wine-making skills. Their wine is even mentioned in Homer’s Illiad and Odyssey. In the Illiad, the finest Thracian wine was brought to the military camps of Troy, whereas Odysseus used Thracian wine to put to sleep the Cyclops before he speared Polyphemus.

It is believed that the Thracians planted the first vines in Bulgaria and started the tradition of wine-making on this land. Wine was an essential part of their cultural and spiritual rituals. The Thracians worshipped the God of Wine – Zagreus or as he later became more popular as Dionysus. Different cults, Orphic hymns, mysteries and legends were associated with the Thracian worship of Wine.

Thus, when the Romans arrived in nowadays Bulgaria in 1st century AD, they found an already booming tradition of producing wine. The Romans further encouraged wine-making and it is believed that it was here that the first “wine decrees” were issued by emperor Antonius Pius in 2nd century AD when he proclaimed the vineyards in Lower Moesia (a region in today’s northern Bulgaria) as protected. Wine was an expensive commodity in Roman times and the word about the high quality of wine produced in the former Thracian territories spread around the empire. The records of trade cities such as Dubrovnik, Venice and Genoa show that Thracian wine was an expensive and sought after product. 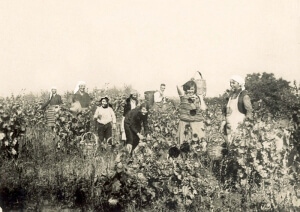 After the fall of the Roman Empire and the subsequent changes on the continent, the Bulgarians, as the natural successors to the Thracians on this land, continued the wine-making tradition, along with some of the cults and rituals. After the Christianization of the Bulgarians in 9th century AD and well into the Middle Ages, the monasteries and churches played an important role in the development of wine production and techniques. Wine was stored in the cool cellars of the abbeys, which became the standard way for wine storage.

During the Middle Ages there was an abundance of wine with different quality produced in Bulgaria. A legend from that period tells the story of the town of Asenovgrad (20 kilometers south of Plovdiv) which was spared from being burnt to the ground in 1205 during the fourth crusade because of the excellent wine that was made there.

Bulgaria was conquered by the Ottomans in the late 14th century which halted official wine production. Nevertheless, wine-making was widespread even during the five centuries under the Ottomans. Right around the Bulgarian liberation from the Ottomans in late 19th century, the Phylloxera struck the Bulgarian vines, having caused major damages to vineyards around Europe as well.

However, in 1929 the first wine cooperative after the liberation from the Ottomans was created. It mainly sold its production domestically and to Germany. The Bulgarian wine-making sector kept growing in size and was extensively funded during the Communist period in the middle of the 20th century, when wine production was nationalized. At that time Bulgarian wine already had a well-established reputation and was a desired product even among the international elite. For instance, every year Winston Churchill, famous for his penchant for particular beverages, was purchasing 500 litres of a typically Bulgarian wine variety – Shiroka Melnishka loza from the Melnik region.

The 1970s marked an era of record wine production in Bulgaria and the country became one of the largest wine exporters in the world. The fall of the Soviet Union, which caused demand for Bulgarian wine to plummet, as well as the droughts in the 1980s, reduced the quantity and quality of Bulgarian wine. It took time after the political (and the subsequent agricultural) changes in the 1990s before Bulgarian wine-making could get back up to the past standards and make its way again in foreign markets.

Since Bulgaria’s EU accession in 2007 a number of small and medium-sized wineries have been established, which focus on quality rather than on quantity. These wineries strive to continue the centuries-old tradition of wine-making on this land and thus, tell the stories of the skillful Thracians in a modern and unique way.

Vines have a memory and Bulgarian wine brings one back to the spirit of the old masters, to the Thracian mysteries, passion and rituals that reminds us the reasons why wine has always been a divine beverage. Create your own memory and become part of the story!