Thracian Wine Vessels and The Role of Wine in Thracian Culture

Written by Albena Stoyanova.  Albena Stoyanova is a tourism professional with an interest in wine, food and festivals. She enjoys the stories behind good wine and is a sustainable tourism supporter. She resides in Plovdiv – the European Capital of Culture 2019. This article is based on the book ‘Thracians and Wine’ by Ivan Marazov.

The Thracians were a group of  numerous Indo-European tribes who created a Thracian civilization and lived for millennia (from the middle of II BC – to VI AD) on a wide territory called Thrace stretching from the Carpathian Mountains to the Aegean Sea and Asia Minor. Their kings and  priests believed in the immortality of the soul. In a preserved fragment from Arian, it is written that the Thracians  were deeply religious and were capable – like real magicians – to make the gods fulfill their will.

Homer was the first author to write about Thracians in his famed piece of work The Iliad that mentions that Thracian warriors from these lands [of Thrace] had come to help the city of Troy in the Trojan war,

Thracians were able to extract gold and silver from the mountainous areas mainly in the Rhodopes Mountain in modern Bulgaria. Some of the most ancient gold mines on the Balkans with galleries longer than 500 meters still exist in the Eastern Rhodopes.

The Thracians processed the metal into finely crafted sets of vessels and pieces used for sacred wine rituals, soldier’s objects, golden masks etc. The skills of local artisans impress even today. They gave new shapes and artistic value to the objects; sculpting vessels with wonderful images from the Thracians lifestyle and myths.

Apart from silver and gold jewelry and items, these ancient people were famous for vine growing. Athenaeus writes that “Thrace and the neighboring lands were considered as lands with a sweet wine”. It was also mentioned  that the wines produced in Thrace were famous all over ancient world. According to Homer, the Greek heroes drank wine, which Achaean ships carried every day on the wide sea from Thrace.

Wine accompanied the Thracians throughout their life. They celebrated the birth of a new family member with wine; and again with wine have sent their deceased to nothingness.

Wine was not only a drink; it was a sacred drink. It was initially used in rituals that connected man with the divine. The purpose of the sacred drink was to release the soul as it enters the body; it takes the place of God. That is why the sacred drink was a pledge in the battle between gods and demons – the one who owned it had the power over the knowledge e.g. over the past and the future of the world.

Hellenic authors describe the Thracians as drinkers and barbarians because they consumed non-diluted wine. At the time, the civilized way to drink wine was as a diluted beverage with water.

Only elderly Thracian men drank wine. The young men joined the clan with a wine ritual. Although typically a drink for men, wine was occasionally consumed by Thracian women as well. Plato once reproached that even “their women drank”. The presence of Thracian women in the feast was not allowed because the archaic society considered the woman’s place to be in the home, to be “inside”. “Outside” was the space belonging to men. A space that was considered dangerous for women and space where she did not belong. Women could pour and serve the wine to men but they were not permitted to drink with men, neither to participate in sacred wine ceremonies. Ancient authors inform us that the women did not know the rules of properly drinking wine and got drunk easily. Once intoxication happened, the entire societal structure was in danger of becoming chaotic because the roles and responsibilities of men and women were reversed.

Most of the treasures excavated on the territory of modern Bulgaria consist mainly of wine vessels. The images on them provide information about the wine rituals and feasts. Paintings depicting dancing people, scenes with Dionysus – the God of wine, sacred animals and floral decor have been found on these vessels. Today, we admire the skilled goldsmiths who shaped these objects with such an exceptional beauty. Moreover, the vessels reveal to us the richness of Thracian culture and the special meaning of wine in their lifestyle  in this archaic society. Just imagine, in 4th century BC, the Thracians had about ten completely differently sized and shaped wine objects!

We elaborate on the most popular treasures with wine related objects uncovered in Bulgaria.

The Rogozen treasure consists of 165 silver items of which 108 of them are phiales, 54 jugs and 3 cups. The total weight is more than 20 kg. Archaeologists date the treasure from the period of end of 6th – 4th century BC. It has been theorized that the treasure belonged to a local Thracian ruler as on some of the vessels it reads the name of the Odrissysian King – Cotys I.

The Valchitrun treasure is made from gold and consists of a total of 13 ritual wine objects of which seven are lid-shaped objects, one triple vessel with three interconnected almond pieces, a kantharos (large, deep bowl with two handles) and four small cups of different sizes. The overall weight is 13 kg. It is dated to the period of 16th – 12th century BC or the end of the bronze era. An extremely curious fact about the craftsmanship of the local artisans is that the small cups were made in such a way that they stand still only when full of wine; otherwise, they tilt. It is presumed that these items were used in religious wine rituals performed by the Thracian priests.

The treasure from Panagyurishte consists of nine incredibly beautiful solid gold objects.  Four of them are rhytons with animals heads, three jugs, a phiale and an amphora. The treasure is dated back to the end of 4th – 3rd century BC. The weight is over 6 kg. See the Panagyurishte gold treasure on our cultural wine tour in the Rose Valley.

The treasure from Borovo contains of five silver items in different shapes decorated with gold details. Three of them are rhytons, a jug–shaped rhyton and a large bowl with handles. There is an inscription on one of the objects saying that it belonged to King Cotys I. The vessels are dated back to the mid 4th century BC during the reign of Cotys I.

The treasure from Lukovit consists of two groups of silver objects rich in decorations and ornaments. The treasure features plates and applications for horse bridles and nine vessels of which five are phiales, three are jugs and one is a  bowl. The treasure is dated to the second half of 4th century BC.

The Thracian kings and aristocracy used the above treasures for their feasts and wine rituals. All the treasures represent finely crafted gold or silver sets of different wine objects. The wine vessels tell a story of how wine was drunk and the complicated way that wine was  served and consumed. To give the reader an idea of how these items were used, here is a description of the drinking process during Thracian times.

The wine is poured from the source into a jug which, according to the images of old paintings, is often in the hands of wine waiter. The wine is drunk only from the phiale, which is flat wide cup; its center is marked by bulged navel looking round. 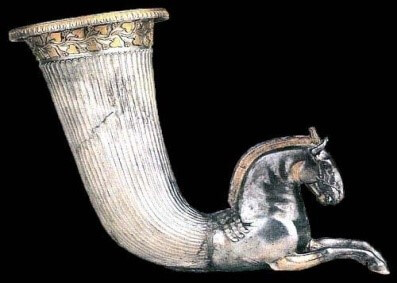 The rhyton is the most remarkable wine ritual vessel in the shape of a horn. The word for it comes from the Greek rheo, which means run. The rhyton has two openings – one in the broad upper part and one below the limbs of the running animal. The idea behind its use is that as the wine pours through the upper wide part of the cup representing the world of the Gods it runs through the horn shape until it reaches the lower one: the zone of mortals. To drink from this vessel required special skills, which the Thracians have improved during their endless feasts – the drinker puts his finger on the right hand to close the lower opening below the limbs of the animal. When he releases it, the wine is poured into the phiale, which he holds in his left hand.

The amphora-rhyton is an impressive rhyton variety, which represents a vase with an egg shaped body with two handles of depicting mythological animals. Sometimes the opening for pouring wine is placed in one of the handles but very often the two openings are placed on the bottom of the vessel. The creation of such a complicated piece of art is due to the wine ritual specifics. 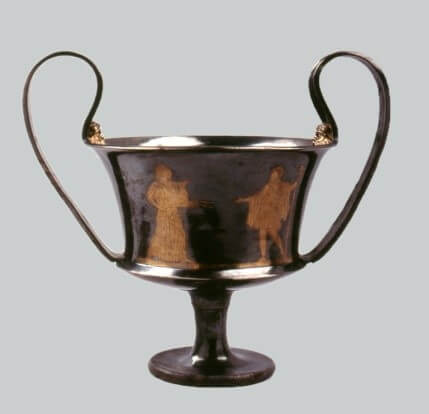 The Cantharos is a cup on a high foot with two vertical handles. The vessel is meant to be ritually changed from hand-to-hand. It belongs to the cult of Dionysus

Kilix is a shallow cup on a short foot with two horizontally placed handles. The kilix was also used for games. The drunk men used them to shoot target with the rest of wine in their cups.

The Goblet is a high cup whose body widens towards the month.

The Skyphos is kilix variety and represents a deep cup with two handles. 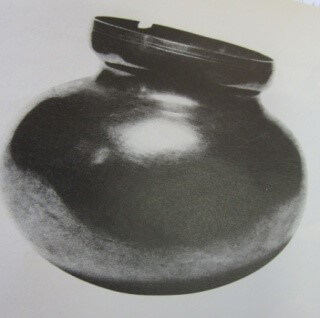 The Aryballos represents a sphere shaped vase on a short foot and a neck which ends with a widening mouth with vertical walls.

If you would like to combine Thracian history by visiting the Valley of Thracian Kings with unforgettable wine tastings of Bulgarian wine, check out “The Rose Valley Wine & SPA 6-Day Trail“. For a tailored wine, history and cultural tour in The Valley of Roses and Thracian Kings, contact Bulgaria Wine Tours (www.bulgariawinetours.com).